All the love. All the drama. All you missed.

A HILARIOUS AND HEARTBREAKING

Foreign rights have been sold to Finland. 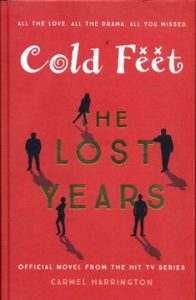 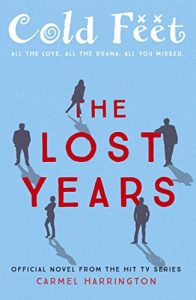 Reeling from the sudden death of Rachel, his beloved wife, Adam has no time to grieve.  He has to keep going, for the sake of their baby son. Jenny moves back in with ex-husband Pete, eight and a half months pregnant with another man’s child. Can their relationship overcome past jealousies? Karen and David agree to an amicable divorce – but that’s before he sleeps with the divorce lawyer . . .

THE LOST YEARS reveals what happened to your favourite characters between series five and six of the award-winning TV series written by Mike Bullen. It’s an irresistible chance to catch up on all the laughter, the tears, the life lessons we missed while they were gone.

Mike Bullen says:  ‘I’m delighted that a writer of the calibre of Carmel Harrington is taking on the challenge of joining the dots between the original Cold Feet and its recent incarnation. Like other fans of the show, I’m excited to catch up with the characters’ lives in the intervening years.’

Carmel Harrington says: ‘I’ve been a die-hard fan of Cold Feet from that first electric pilot episode in 1997. It’s a joy to write further adventures for these beloved characters, created by the incredible Mike Bullen. I’m honoured and excited to work with the teams at Hodder and ITV.’

Harrington should be very proud – it really is fabulous!

and group dynamic. An immensely enjoyable companion to the TV show.

I could picture each chapter as a scene in my head.

A fantastic adaptation that keeps the essence of everything that

made Cold Feet, Cold Feet and for fans of the show, it is a must-read.

Listen to Carmel chat to Ryan Tubridy on RTE Radio1 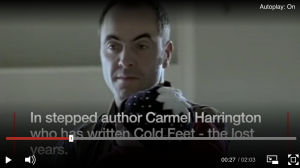